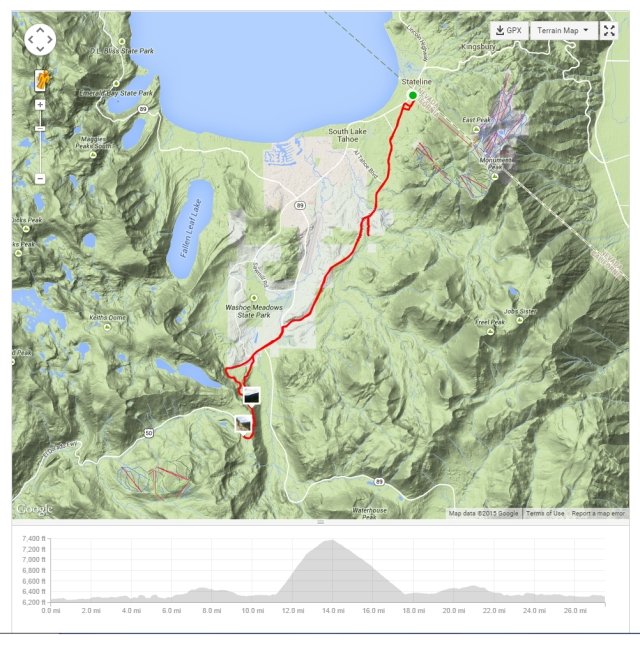 I’d gotten in close to 100 miles in the first two days of riding, and I had a hard ride planned for tomorrow—the classic ride around Lake Tahoe. As a result, for the third day I wanted to do a shorter, not-too-hard of a ride to recover and be fresh for tomorrow’s epic ride. It was cloudy and quite a bit cooler (48F) when I started out, but it sunned up as I was out and turned into a nice day. The plan was to do an out-and-back ride up to Echo Summit on the western side of the Tahoe Basin—under 30 miles and only one climb before turning around and enjoying a fast descent back into town. 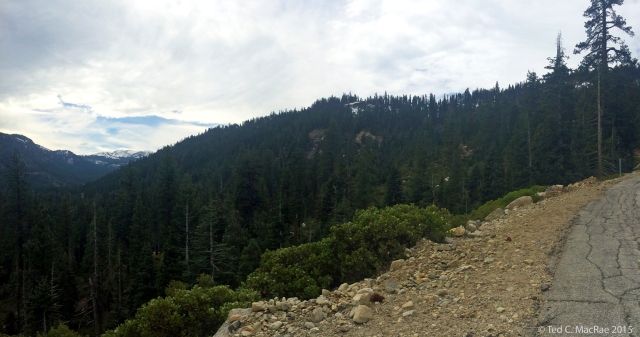 Rather than climbing to Echo Summit via the heavily traveled Hwy 50, I detoured off at the base and climbed the lower two-thirds on the Old Meyer Grade. This old route up the pass is now closed to traffic, but it still has a good asphalt surface. Climbing just over 1,000 ft in 2.7 miles (the last mile on Hwy 50) with an average gradient of 8% doesn’t sound too bad (especially compared to yesterday’s Kingsbury Grade), but the grades are much steeper on the Old Meyer Grade, whose 1.7-mile stretch averages a rather terrifying 10.5%. I was only the climb only a short distance before resorting to my granny gear (36×25), which I used almost all of the way up until I getting onto Hwy 50. On the way up I passed a few walkers—seniors that appeared to be locals who used the road as their daily workout (good for them!), and near the top at the steepest part before reaching Hwy 50 I even passed an old man walking up with a cane! Good for him! Once the grade ended and dumped me out only Hwy 50, the grade become much milder and I was able to use higher gears and climb the last mile to the summit with relative ease. My total time of 25:24 on the climb translates to only 5.8 mph, but I can assure you that if I lived in the area this is one climb that I would be trying regularly and shooting for ever faster PRs. 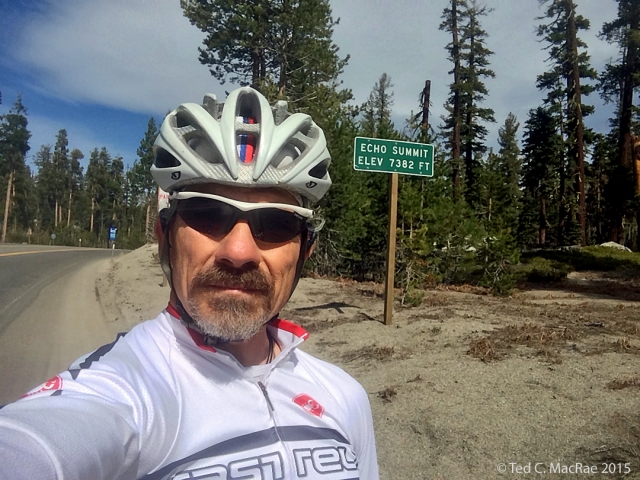 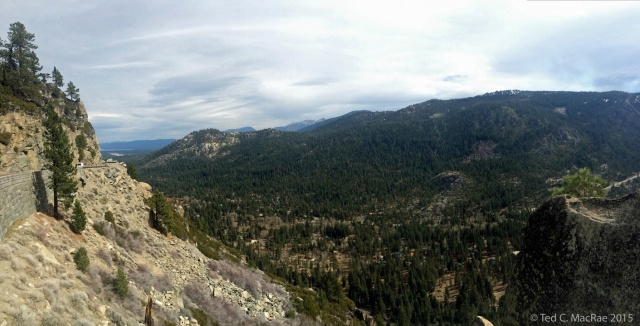 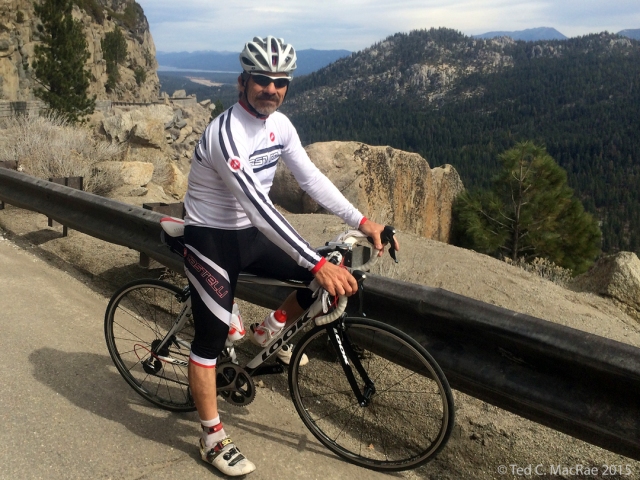 Thanks to the group of Russian tourists for taking my photo at Echo Summit.

I stayed on Hwy 50 for the descent coming back down—at the speed I was going I really didn’t have to worry about traffic passing or even being held up by me. Even though I’d never done this descent before, I quickly found my groove and enjoyed it to the fullest. It was a twisting, turning, long descent with a nice, smooth surface and incredible views of a mountain on one side and the lake basin down below on the other. After completing the descent I turned back to the east on Pioneer Trail—my first time going in that direction—and I can tell you that it is much easier in that direction than going to the west. Overall, it was a nice ride—a good workout without being too hard—and I found myself primed and ready to tackle the next day’s ride around Lake Tahoe.

Stay tuned for the next installment covering the iconic ride around Lake Tahoe. Although it wasn’t the “Queen” stage of this year’s tour (that would come later in the week), the iconic route is epic enough to qualify as such—more than a metric century with nearly a mile of vertical ascent (all between 6,000 and 7,000 ft elevation).

Ted C. MacRae is a research entomologist by vocation and beetle taxonomist by avocation. Areas of expertise in the latter include worldwide jewel beetles (Buprestidae) and North American longhorned beetles (Cerambycidae). More recent work has focused on North American tiger beetles (Cicindelidae) and their distribution, ecology, and conservation.
View all posts by Ted C. MacRae →
This entry was posted in Lake Tahoe and tagged climbing, mountains, road rides, vacation. Bookmark the permalink.