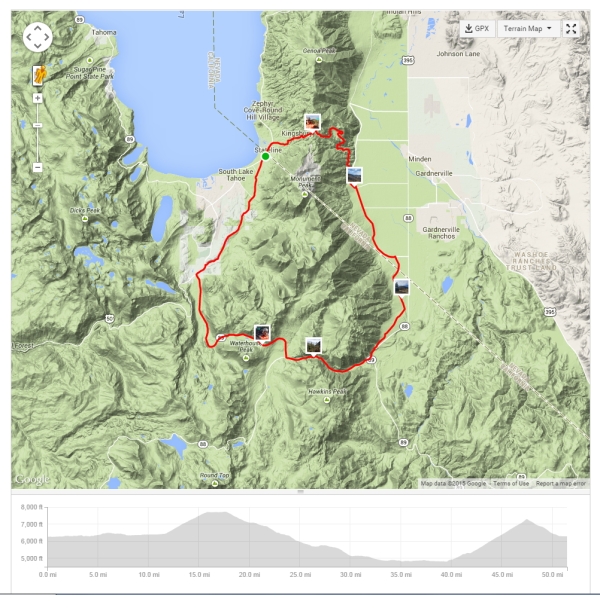 Wow, what a day! Temps again were in the mid 60s in South Lake Tahoe, a bit colder at higher elevations, and warmer down in the valley. Today was definitely not a “big chainring” climbing—the two climbs featured today were big! I headed out of town into stiff headwinds along the Pioneer Trail and its persistent, low-grade climb, then started up Luther Pass along Hwy 89 in earnest. Luther Pass is a Category 2 climb—4.2-mi long with 1,247 ft of ascent with an average gradient of 6%. However, the headwinds directly against me the entire time really sucked the life out of me and made the climb feel much harder, and I ended up using a fairly small gear (36×21) most of the way up.

Eventually I made it over and then enjoyed a short, wide open descent down to the junction of Hwys 88 & 89 and then a much longer, steeper, and narrower descent down Carson Pass through Cloudburst Canyon and into the valley—a total distance of more than eight miles that dropped me nearly 2,000 ft from the alpine forests above to the desert valley below.

Near the bottom of the descent I veered onto Emigrant Road, which took through Fredericksburg as part of more long, gentle descending. Although I am an experienced road cyclist that has logged perhaps close to 100,000 miles across the country (and Europe) over the past 15 years, the remoteness of the area and the fact that I’d never been on these roads before—by bike or by car—had me feeling a little like I was flirting with danger, although with a spare tube in my bag, a cell phone in my pocket, and hardly a car to worry about I’m not sure what bad could have actually happened to me.

After more gentle descending along Foothill Road I eventually I made it to the base of the Kingsbury Grade—I stood at the junction of Hwys 206 & 207 and looked up at the massive, Category 1 climb—7.9-mi long and gaining 2,520 ft with an average gradient of 6% before ending high up at Daggett Summit. It looked daunting, but I’ve done daunting before (Mt. Rose last year and a number of classic Pyrenean beasts in 2007 and 2010). I had a goal to beat one hour, so I checked the clock and started out. It was not too hard on the lower slopes, especially since I had a tailwind, but once I got into the upper slopes the grade steepened (or so it felt), and the winds at times turned against me. I was in a fairly easy gear (36×21) most of the time and then in the last half mile or so I had to bail and use my lowest gear (36×25)!

View from halfway up Kingsbury Grade

That last couple hundred yards was tough, but I made it, and checking the computer I was elated to see my time up the climb was 59:54—talk about just beating the goal! I took the requisite “summit selfie” and started the descent down into the Lake Tahoe Basin. I did this descent last year so had an idea of what it was like—twisting and turning but not terribly steep. It was also fairly sheltered from wind and had very little traffic, which allowed me to descend a little more aggressively than I did yesterday and get some of my descending mojo back that I haven’t felt like I’ve had lately. I looked forward to more descending during the week to come.

Monday’s Stage 3 is a relatively short stage (due to a planned “epic” Stage 4 the following day), but it does feature one of the steepest climbs in the area—the Old Meyer Grade leading up to Echo Summit.

Ted C. MacRae is a research entomologist by vocation and beetle taxonomist by avocation. Areas of expertise in the latter include worldwide jewel beetles (Buprestidae) and North American longhorned beetles (Cerambycidae). More recent work has focused on North American tiger beetles (Cicindelidae) and their distribution, ecology, and conservation.
View all posts by Ted C. MacRae →
This entry was posted in Lake Tahoe and tagged climbing, mountains, road rides, vacation. Bookmark the permalink.