Let’s face it – if you’ve got a racing bike, the only stylin’ choice for handlebar tape it white! White is hot. White is pro. White looks good no matter what other colors the rest of your bike sports. That’s not to say that other colors look bad – especially if they coordinate with the frame, saddle, and/or wheels, but it can be tricky sometimes getting the shade on the different parts to match perfectly. (If you see nothing wrong with royal blue tape on a cobalt blue frame, you may skip the rest of this post. I promise not to snicker behind your back. Honest.) The only real color no-no for handlebar tape is black. Black is boring. Black is unimaginative. Black is giving up. The only possible exception to this is black tape on a completely blacked-out bike (white would still look better!).

There are two things, however, that keep people from choosing white. One is guts – flashing white says you think you’re fast. If you ride a bike with white handlebar tape, people expect you to be fast. If you’re not, you risk the dreaded “Fred” tag. Of course, if you really are a Fred, then you’re already labeled and this should be no problem. If you’re not a Fred, then you shouldn’t care what others think, so again this isn’t really an obstacle. The other reason people don’t use white tape is more legitimate – white gets dirty. As good as white handlebar tape looks when its clean and bright, it looks that bad when its dirty. This isn’t a problem for the pros – mechanics are on hand to 24/7 to do a thorough cleaning or even a new tape job whenever needed. But for working schmos who have half a life and only do this as a hobby, continually cleaning and changing handlebar tape is both time and cost prohibitive.

When I made the switch to white handlebar tape, I first tried Cinelli Cork for its soft feel and sweat absorption. In those qualities it excelled, but it also got dirty quickly and was difficult to clean. Then I tried Stella Azurra Eleganza for its stitched leather-look. It reminded me of the steering wheel in a high-end European luxury sedan, and I also loved its super tacky feel. But, again, it got dirty quickly, and no amount of cleaning could return it to its like-new glory. I figured that was the price to pay to have white, but on a group ride last summer I noticed another rider with bright white handlebar tape, and I said, “New tape job, huh?” I was suprised when he told me that it was actually a few months old. I asked him what brand it was, and he said, “Fizik, man this stuff never gets dirty.” So I tried it for myself. That first tape job lasted almost a year and never got dirty! The only reason I needed to change it out was because some of the 100+ little black Fizik logos started wearing off. I replaced it with new Fizik tape (now, sadly, lacking all the little logos), and the picture below shows how clean this tape job has remained after almost three months and ~1,500 miles. I’ve only cleaned it a couple times when I washed the bike, the last time a few weeks ago, and it is almost a clean and bright as the day I installed it.  Since I prefer not to wear gloves, I do miss the tacky feel of the Stella Azurra tape, but the Fizik tape is not at all slippery.  Nor is it as cushy as the Cinelli cork tape that I tried, but since Paris-Roubiax doesn’t appear to be anywhere in my near future I don’t need the cush. 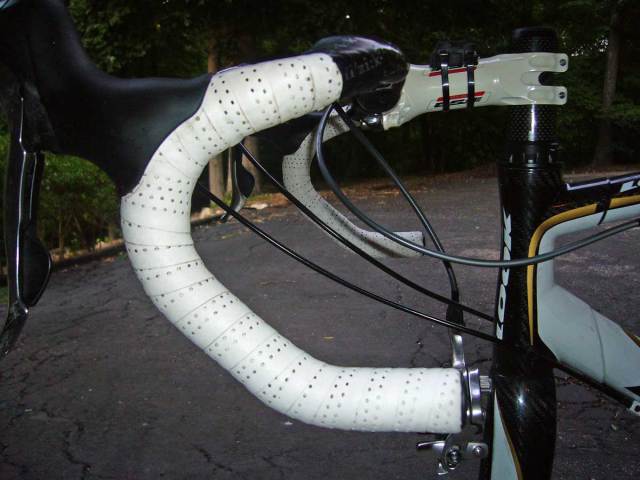 If I do say so myself, this is probably the best handlebar tape installation job I’ve managed yet. A good tape job is distinguished by several features – tape in the proper direction (away from the frame on the overside starting at the bar ends, with a reverse at the brake hoods), even overlapping with no gaps (easy to do at the outer bends or around the brake hoods), a square cut around the end near the stem that is secured in place by tape that covers the cut edge perfectly without overlapping onto the handlebar itself, and – most importantly – a smooth, even tuck under the end cap. That last part has always been a challenge for me, never seeming to get it quite right. However, I’ve finally figured out the trick to flawless bar ends, and since I’m such a nice guy I’ll share that trick with you here. First, install the tape leaving excess extending past the bar end. Then, trim the tape at the bar end with a very sharp knife or scissors, leaving about 1/8 inch of tape overlapping the bar end – no more, no less. Insert the end cap and push until it touches the cut end of the bar tape, and use the sharp knife to fold down the tape against the bar end while pushing the cap up against it. Work around the end cap in circular fashion, folding down the tape and pushing the end cap closer and closer until it is firmly seated against tape at the bar end. You can smooth out any small folds that still remain in the tape by slightly prying the end cap away from the tape, smoothing the fold by pushing and holding the side of the sharp knife against it, and re-seating the cap against the tape while pulling the knife out. 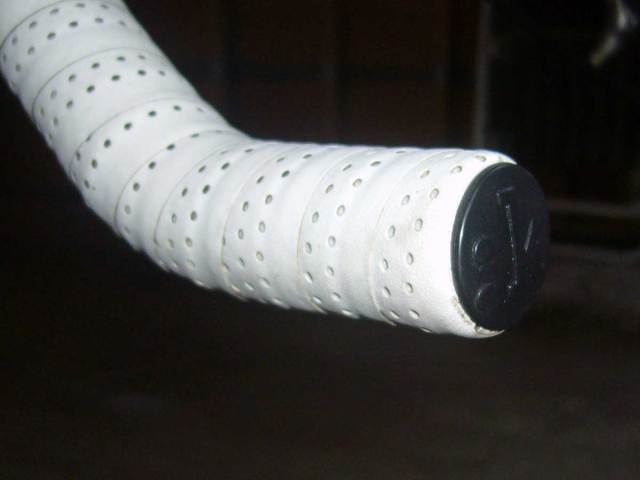 Ted C. MacRae is a research entomologist by vocation and beetle taxonomist by avocation. Areas of expertise in the latter include worldwide jewel beetles (Buprestidae) and North American longhorned beetles (Cerambycidae). More recent work has focused on North American tiger beetles (Cicindelidae) and their distribution, ecology, and conservation.
View all posts by Ted C. MacRae →
This entry was posted in Components and tagged cycling, handlebar tape, product review, style. Bookmark the permalink.